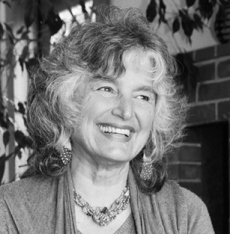 Vicki Robin is a renowned innovator, writer, and speaker. In addition to coauthoring the bestselling Your Money or Your Life, Robin has been at the forefront of the sustainable living movement. She has received awards from Co-Op America and Sustainable Northwest, and was a speaker on relational eating at TEDxSeattle.

Her new book, Blessing the Hands that Feed Us; what eating closer to home taught me about food, community and our place on earth (Viking/Penguin 2014) tells how her experiment in 10-mile eating not only changed how she ate, but also renewed her hope and rooted her in her community. She calls this “relational eating.” She went on to investigate how we might restore the vitality of our regional food systems so everyone could have the benefit of relational eating – healthy food, healthy communities. She calls this building “complementary food systems,” not to replace but to work along side of the global industrial systems we now depend on for almost 100% of our food. Her book offers many practical tools for transformation, from changing our attitudes, to changing our habits to changing our food sources to getting active in social and political change.

Called by the New York Times as the “prophet of consumption downsizers,” Vicki has lectured widely and appeared on hundreds of radio and television shows, including “The Oprah Winfrey Show,” “Good Morning America” and National Public Radio’s “Weekend Edition” and “Morning Edition”; she has also been featured in well over 100 magazines including People Magazine, AARP, The Wall Street Journal, Woman’s Day, Newsweek, Utne Magazine and the New York Times.

Vicki has helped launch many sustainability initiatives including: The New Road Map Foundation, The Simplicity Forum, The Turning Tide Coalition, Sustainable Seattle, The Center for a New American Dream, Transition Whidbey and more. In the 1990’s she served on the President’s Council on Sustainable Development’s Task Force on Population and Consumption.

In addition to her sustainable consumption work, Vicki has been a leader in the field of dialogue. She co-created the Conversation Cafés method and initiative, promoting it first in Seattle and then throughout the world. Conversation Cafés are hosted conversations among diverse people in public places on subjects that matter. Vicki has spoken at workshops, conferences and to the media (Readers Digest, National Public Radio, Utne Magazine, The New York Times, The Seattle Times and many local media) about the Conversation Café method and its possibilities for revitalizing our public life.

For fun, Vicki is a comedy improv actress, appearing frequently with her troupe, Comedy Island.

Indiebound connects you with your favorite bookstores to buy locally